A Toast to the SOBE Wine and Food Festival! 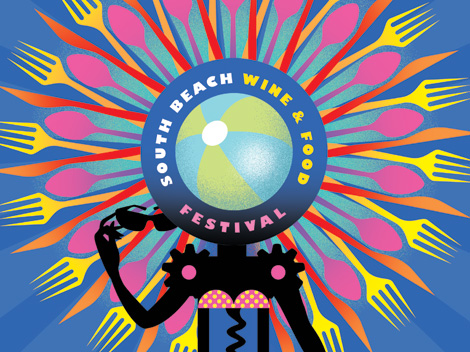 Who doesn’t love a tasty meal and a nice glass of wine? At the South Beach Wine and Food Festival (the nation’s largest wine and food festival) people have a chance to pay homage to some of the world’s most ancient pleasures. Throughout history wine has been an important part of various cultures across the planet. As time went on wine continued to build in popularity as vineyards began sprouting up everywhere.  Today wine drinkers are an eclectic breed, they come from all walks of life and every one has a particular set of tastes. You would be hard pressed to find a wine lover that doesn’t have a favorite blend. From February 20-23 the Cabernet drinkers, the Riesling enthusiasts, and the unalterable Merlot fanatics will unite as one in Miami to enjoy endless events based around our love for food, wine, and spirits.

The South Beach Wine and Food Festival initially started as a fundraiser in 1997 and was celebrated for only one day at Florida International University’s North Miami Campus (approximately 450 people attended), but since then it has exploded into a four day celebration filled with culinary celebrities and some of the best wine and spirits from every region around the globe. It was in 2002 that the SOBE Wine and Food Festival truly put itself on the map as an event not to be missed in Miami (over 7000 people were in attendance). In addition to the endless seminars, tastings, and extravagant parties to keep people entertained a New York Magazine food critic was actually hauled away in handcuffs and arrested for disorderly conduct for his abrasive behavior at the Grand Tasting Tent. According to reports he just didn’t want to wait in the long lines and felt entitled to shove his way through. The following year chef Gordon Ramsey made quite a scene at Smith and Wollensky, and turned the tranquil South Pointe Park restaurant into a real-life kitchen nightmare. These unpleasant but devilishly entertaining mishaps went on to prove the theory that there is no such thing as bad press doubling the population of the SOBE Wine and Food Festival for the next year. Now everyone wanted to be a part of the party. As the years went on the SOBE Wine and Food Festival continued to progress—the number of guests kept growing, the celebrities swarmed in, the events became more elaborate, and last year 53,000 people were in attendance. This year is suspected to be even bigger!

The 2014 SOBE Wine and Food Festival’s first event is Moet Hennessy’s The Q sponsored by Miami Magazine. This incredible occasion, which takes place at the Delano Hotel, will include 40 different meals from world-renowned chefs and a visit from the luscious Sports Illustrated Swimsuit Models. Other events not to be missed are the Jean-Georges Vongerichten Dinner (part of the New York Times Dinner Series), brunches and lunches like the All Aboard: Backyard BBQ at Sea, late night parties like Cigars and Spirits, and various walk-arounds and tastings like the Whole Foods Grand Tasting.  You can also expect to see television chefs like Bobby Deen and Rachael Ray and Food Network favorite Tyler Florence! Come join us this year and make 2014 the best South Beach Wine and Food Festival yet!

This entry was posted on Thursday, February 20th, 2014 at 3:27 pm and is filed under Entertainment, Luxury Travel, Miami, Miami Beach Luxury Travel, Nightlife, Travel. You can follow any responses to this entry through the RSS 2.0 feed. You can leave a response, or trackback from your own site.

101 Responses to “A Toast to the SOBE Wine and Food Festival!”