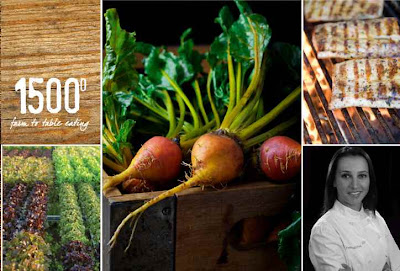 Housed in a historic building on Collins Avenue the new 1500° restaurant is a result of a $220 million renovation of the property that houses it.  Built in 1956 this structure was designed by the great Morris Lapidus, an original purveyor of Miami Beach style and design, and has now had new life breathed into it with the extensive renovations and the opening of the hotly anticipated 1500° this month. According to the restaurant’s website their firm belief is that “no dish can be better than its ingredients.” With that thought in mind Chef Paula DaSilva has prepared a seasonal menu made up of largely fresh and local ingredients with a decidedly steakhouse bent. Not only has the ownership here brought in DaSilva, a chef with more than 10 years of experience at Miami’s 3030 Ocean restaurant among others (she was also a finalist on Gordon Ramsay’s Hell’s Kitchen), but also the experienced restaurateur Seth Greenberg who is tasked with collaborating with DaSilva to make 1500° the place a well-heeled gourmand will want to frequent whether they live in Miami or are staying on in a luxury villa rental. “Our goal is to appeal to visitors and locals alike,” Chef DaSilva states. “Whether you’re a foodie tourist on a culinary exploration of Miami’s best restaurants, or a local looking for an exquisite meal in a gorgeous setting, 1500° will fit the bill.”

END_OF_DOCUMENT_TOKEN_TO_BE_REPLACED

Is Lincoln Road Miami’s New Up and Coming Area?

Sunday, September 12th, 2010
Those Vacationing in Miami Beach Luxury Villa Rentals May Want to Check Out What All the Fuss is About with 1111 Lincoln Road and its Neighbors

Lincoln Road in South Beach is one of those rare pedestrian-only streets in a city of cars and traffic that reminds one of Barcelona’s tourist-trap Las Ramblas in many ways. Except now several companies, developers, and designers have moved in to rethink Lincoln Road and regentrify the area, producing buildings, stores, and restaurants meant to usher in a new era for the foot traffic on this road. Real estate developer Robert Wennett’s 1111 Lincoln Road is the biggest and showiest of the projects here and seeks to “further Miami’s international prominence as a 21st-century destination for art, commerce, and culture.” While Wennett has managed to pull in several international retailers for his multi-purpose building, it remains to be seen if he will have the same success with Lincoln Road as he has had with his other projects, like the Meatpacking District in Manhattan. If you’re planning a vacation in one of Miami’s luxury villa rentals you may want to head down to Lincoln Road to see for yourself the evolution currently taking place here. END_OF_DOCUMENT_TOKEN_TO_BE_REPLACED